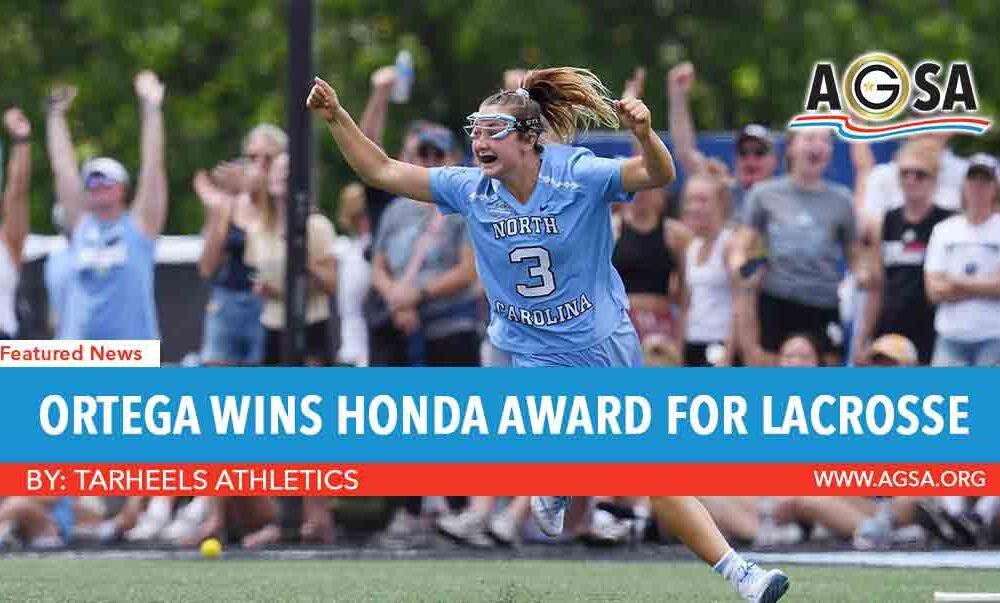 Jamie Ortega, a senior attacker from the University of North Carolina, was named the Honda Sport Award winner for Lacrosse as announced today by Chris Voelz, Executive Director of THE Collegiate Women Sports Awards (CWSA).

The Honda Sport Award has been presented annually by the CWSA for the past 46 years to the top women athletes in 12 NCAA- sanctioned sports and signifies “the best of the best in collegiate athletics”.  The winner of the sport award becomes a finalist for the Collegiate Woman Athlete of the Year and the prestigious 2022 Honda Cup, which will be presented on a live telecast on CBS Sports Network on June 27th.

“I am honored to have been chosen for this year’s Honda Sports Award for Lacrosse,” Ortega said. “To be selected from this amazing group of finalists is truly gratifying. I am part of an incredible team sport and receive this along with the teammates who I’ve shared my accomplishments with, and I am both humbled and grateful to have been chosen.”

Ortega was named the ACC Attacker of the Year for the second straight year and is a two-time Tewaaraton Award finalist. Hailing from Centereach, N.Y., she is a four-time First Team All-American and the first five-time All-American in UNC history after earning Third Team honors as a freshman.

She led North Carolina to four trips to the NCAA Final Four and the 2022 national title. In the conference postseason, she set ACC Tournament records with nine points and five assists against Boston College.

The attacker is UNC’s leader in goals (69), assists (44) and points (113) on the season and her points and assists ranked sixth and seventh nationally. Overall, she finished her career first in ACC history and second in NCAA history with 466 career points. Her 334 career goals are third in the NCAA history and second in ACC annals. The senior closed her career as UNC’s career leader in goals and points and is second in school history in assists.

“We are so grateful that Jamie is being recognized with the prestigious Honda Award,” said head coach Jenny Levy. “We cannot think of a more deserving student-athlete. Throughout her time in Chapel Hill, Jamie excelled at the highest level and continued to grow as a player and teammate. A consummate winner, her consistency of excellence during her collegiate career and the impact she had on our program is unparalleled.”

“As a co-captain of our 2022 team, Jamie’s leadership, hard work and dominant performances were keys to our undefeated, national championship season,” continued Levy. “Simply put, she is a champion who represents the University of North Carolina and the sport of lacrosse in a first class manner.”

The CWSA, entering its 46th year, has honored the nation’s top NCAA women athletes for their superior athletic skills, leadership, academic excellence and eagerness to participate in community service.  Since commencing its partnership in 1986, Honda has provided more than $3.4 million in institutional grants to the universities of the award winners and nominees to support women’s athletics programs.