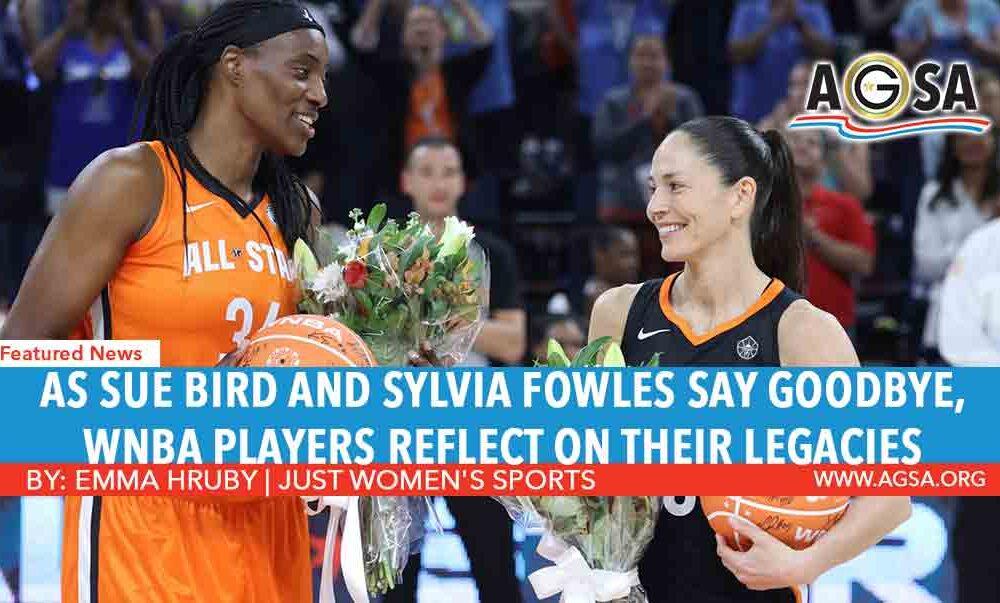 The WNBA regular season is nearing its end, and so are the careers of two of the game’s best players.

Sylvia Fowles and Sue Bird will meet for the final time in the regular season Friday, as Fowles’ Minnesota Lynx host Bird’s Seattle Storm. In the coming weeks, each will step onto a WNBA court for the final time as a player. Still, the impact each has had on the game will remain.

Los Angeles Sparks forward and WNBPA president Nneka Ogwumike underlined the power of both players, which extends well beyond their stat lines.

“The legacy that they’re leaving – it touches so many young players that I can’t wait to see how that evolves in someone else’s game,” Ogwumike told Just Women’s Sports. “They’ve done so much for the league, so much for the culture, so much for certain franchises that are now living in history.

“I’m happy we can give them their flowers while they’re still going hard and hooping.”

As a young player, Las Vegas Aces guard Kelsey Plum looked up to the duo, who she said not only influenced her game but also made her proud to be part of a league like the WNBA.

“You can’t speak enough to what both of them have done in different realms of the sport,” Plum said.

Speaking at the WNBA’s All-Star weekend, stars from across the league pointed to Bird and Fowles as trailblazers, role models and leaders.

Chicago Sky guard Candace Parker has played against Fowles since she was 14 years old and matched up against Bird for the first time in college in 2006, but also has gotten to play alongside both as part of gold-medal winning U.S. Olympic teams.

“For me personally, they’ve made me better as teammates but also made me better competing against them,” she said. “It’s amazing to be able to honor them.”

For Connecticut Sun forward Jonquel Jones, Fowles is “the toughest matchup” that she’s ever played against in her career.

“So strong physically. So dominant. A great finisher around the rim,” she said of the Lynx center. “She’s definitely someone that I look up to, someone that I try to model and shape my game around. She was the prototype of what success for a long time in this league looks like.”

Jones views Bird as a “prototype” for point guards in the league. The Storm star has helped shape the game both for the WNBA and women’s sports as a whole, Jones said.

When Fowles and Bird each were asked about the other’s impact, both focused on the strengths of the person – not the player.

“Sue Bird is everything this game needed: her leadership, her sisterhood, her friendship and just the things she does for the community,” Fowles said. “I think any young player, young point guard should have a good foundation of role models to go off of and Sue Bird is definitely one of those people.”

For Bird, Fowles’ care for her teammates sets the Lynx center apart from the rest.

“Sylvia is the one player I think in our league, when you see how her teammates interact with her, how they take to her – I know they jokingly call her grandma and whatnot – she really just has a certain nature about her that is so warm, so welcoming and so inviting,” Bird said. “I think the way that she impacts her team, the way she’s able to bring groups together, I can’t even think of another player that does it the same way Syl does.

“Believe me, I could sit here and talk about points and rebounds and championships and all of the things, but that, I think, is the secret ingredient that she has.”

“It’s pretty remarkable, what they’ve meant to our sport and to everyone,” Ionescu said. “Where they came from and where they’ve left the game is absolutely in better hands. We’re excited as younger athletes to continue to pave the way for those to follow but they’ve done an incredible job and their career has been nothing short of amazing.”

For Howard, Fowles and Bird have provided footsteps to follow.

“They’ve set the stone,” Howard said. “They’ve been and done everything that young rookies like me want to do. So just to have them to look up to is big.”

Seattle Storm star Jewell Loyd sees in the retirements of Fowles and Bird a call to action for those still in the league and those to come.

“They’re what it means to be a professional athlete. To be a role model. To be a leader,” she said. “They are a generational talent. It’s sad that they’re leaving but they’ve left their mark and it’s our job now to carry that through.” The Little League Softball World Series begins Tuesday, marking the second year in a row that the event has graced the fields of Greenville, N.C.

For the first time, the competition features 12 teams in a brand-new expanded bracket. A total of eight U.S. teams and four international teams are going for the title.

For the second straight year, Daniel Boone represents the Central Region. The team placed third last year and looks this year to become the first team from Missouri to win the tournament.

A newcomer, Delmar recorded 48 runs across four games in the the first-ever Mid-Atlantic Region tournament. The defending state champion is the only team from Maryland to make it to the LLSWS.

Issaquah features a one-two punch in star pitchers Shaelyn Erickson and London White. The team went undefeated in its regional tournament to reach the LLSWS for the seventh time.

A three-time LLSWS champion from Texas, Midway nearly missed the tournament after losing to Louisiana early in the Southwest Region tournament. The team rebounded in the championship game and aims to win the World Series once again.

This year’s appearance from Chesterfield marks the seventh time a team from Virginia will make the tournament. It’s the second-straight trip to the LLSWS for Chesterfield, which went 3-0 in the regional tournament, including a 4-3 against Rowan (N.C.) in the championship game.

The 22nd team from California to make the tournament, La Verne scored 30 runs in the West Region tournament and allowed just one. Pitcher Katie Coldiron has been outstanding in the circle, recording 44 strikeouts since the start of district tournament play.

The Asia-Pacific champion is trying to become the first team from its region to win the LLSWS.

Guayama makes its first-ever appearance at the LLSWS and is the first Puerto Rican team to represent the Latin American Region since 2017.

The Canadian team did not drop a game in its regional championship run and has won 38 total gamest this season compared to just six losses. St. Albert logged two double-digit run games in the regional tournament.