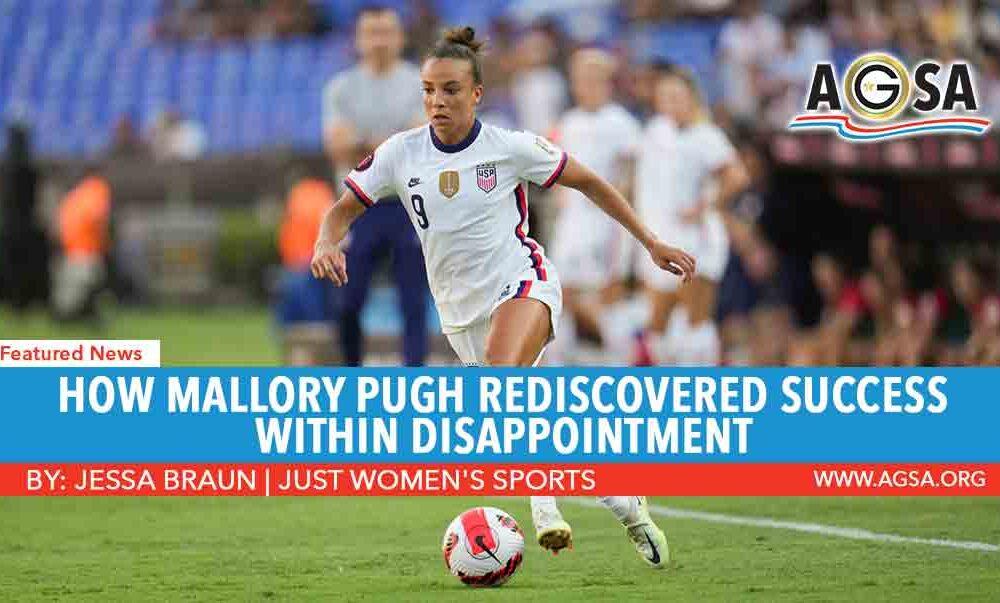 A year ago, Mallory Pugh didn’t make the U.S. women’s national team Olympic roster. Now, over 10 months out from the 2023 World Cup, she’s one of the USWNT’s most relied upon attackers and is making a case for being the best player in the NWSL.

Currently in fourth place in the NWSL Golden Boot race with eight goals, the 2021 MVP nominee has been widely considered a frontrunner for this year’s top award. Across all competitions — the NWSL Challenge Cup, the NWSL regular season and international games — Pugh has 18 goals.

Her secret for rising back to success has been simple: staying present and enjoying every moment.

There’s no stopping Mallory Pugh when she’s having fun. That joy, after all, is how she became so good in the first place.

Before she was even old enough to play on her own team, Pugh was obsessed with soccer. Having the ball at her feet brought her so much delight that she didn’t even care about the rules of the game. She’d tag along to her older sister’s training sessions, where she and her dad would kill the hour and a half on an empty field with a full-sized net just up the hill. Pugh vividly remembers the day she kicked the ball over the crossbar.

But Pugh didn’t care. That was the first time she’d lifted the ball in the air. She was living in the moment, and it was fun.

When she started attending her sister’s games, Pugh would sit on the team’s bench, intently watching the older athletes and how they played, waiting for halftime when she could tear onto the empty field and try the moves herself.

At 13, she was playing on her own team for Real Colorado. Her talent stood out enough that club president Lorne Donaldson decided to bring her along to Portland, Ore. for the Manchester United Premier Tournament, one of the biggest U-14 tournaments the club could enter into. Pugh was younger and smaller than the others, but Donaldson didn’t want her to overthink the opportunity.

“We just gave her the freedom and said, ‘Hey, listen, just go enjoy it,’” he said. “That’s when we really started to realize she had something special.”

Once back home, players from younger Real Colorado teams, like Pugh’s future USWNT teammate Sophia Smith, would go to her games just to watch her play.

Pugh rapidly rose up the ranks, all the way to a global stage in 2016. At 17, she made her senior national team debut, becoming the youngest player to do so since Heather O’Reilly in 2002. After scoring her first international goal in that game, she also became the youngest player to make a Concacaf Olympic qualifying roster. She then went on to the 2016 Rio Olympics and, three years later, won a World Cup title with the USWNT.

It appeared there was no stopping Mallory Pugh.

But then it all came to a halt.