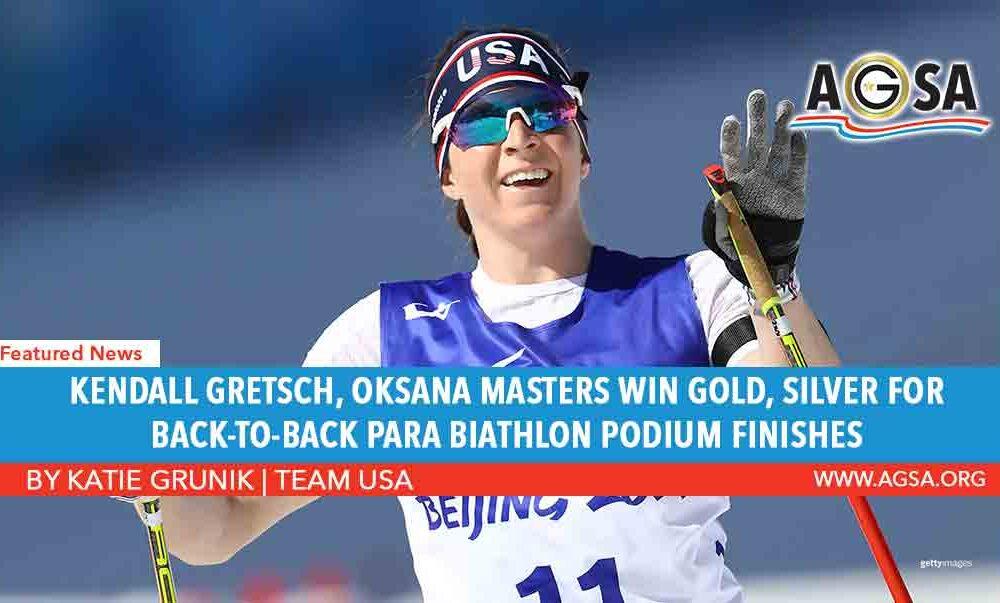 Kendall Gretsch won gold after finishing in 33:12.3. She entered the race as the current world champion and improved on her fourth-place finish from the Paralympic Winter Games PyeongChang 2018.

“I’m really excited with today’s race,” Gretsch said. “I had a good day on skis, and I’m happy with our performance. Hopefully, we can build on that for the rest of the races too.”

“It’s going to be an incredible podium,” Masters said. “I’ve got my teammate Kendall on top and an incredible athlete, Anja Wicker. She’s been my influence in biathlon. … She’s who I embody, she’s the queen of biathlon. I’m so happy to share this with Team USA and Germany on the podium.”

On a sunny day with the most favorable racing conditions of the Games so far, Gretsch took control of the 2.5-kilometer race around the halfway point. The now four-time Paralympic gold medalist made up time in the race thanks to her quick and accurate shooting. She only missed one shot out of the four shooting passes.

“I really wanted to shoot or hit as many as I could because the races have been tight so every shot counts,” Gretsch said.

Shooting proved to be a key element of the race for both Team USA athletes on the podium. Masters, who also won her second-straight biathlon medal at the Beijing Winter Paralympics, shot clean across all four shooting passes.

“I know my teammate, Kendall Gretsch, is an incredible shooter. She’s a fast shooter, and in the past, I’ve tried to keep up with that,” Masters said. “… This is my second consecutive biathlon medal that I’d shot clean for, which I don’t normally do. I’m so proud of myself.”

The U.S. Para Nordic team has seen the most success at the Paralympic Games so far, boasting seven total medals, thanks in part to Gretsch and Masters. The duo accounts for half of Team USA’s 10 total medals as of Tuesday afternoon, and the only two American gold medals so far.

Despite their continued success, both women remained humble and thankful to their support systems, who have been there for them at both the Summer and Winter Paralympic Games over the last six months.

“We have such a strong program and great support from our team,” Gretsch said. “… Back home I have a ton of family and friends that are supporting me. It’s so great knowing that they’re supporting me while they’re there and watching and cheering me on.”

Both Cnossen and Gretsch have pointed to the altitude as a difficult component in both the cross- country and biathlon races.

“I’ve just been struggling a little bit with the altitude and the dry air,” Gretsch said. “It just feels like it’s your heart rate is skyrocketing, and you can’t take a deep breath. Today, it felt a little bit better so maybe just more time here helped.”

Several of Tuesday’s competitors will take the snow again on Wednesday to compete in the Para cross-country sprint races.