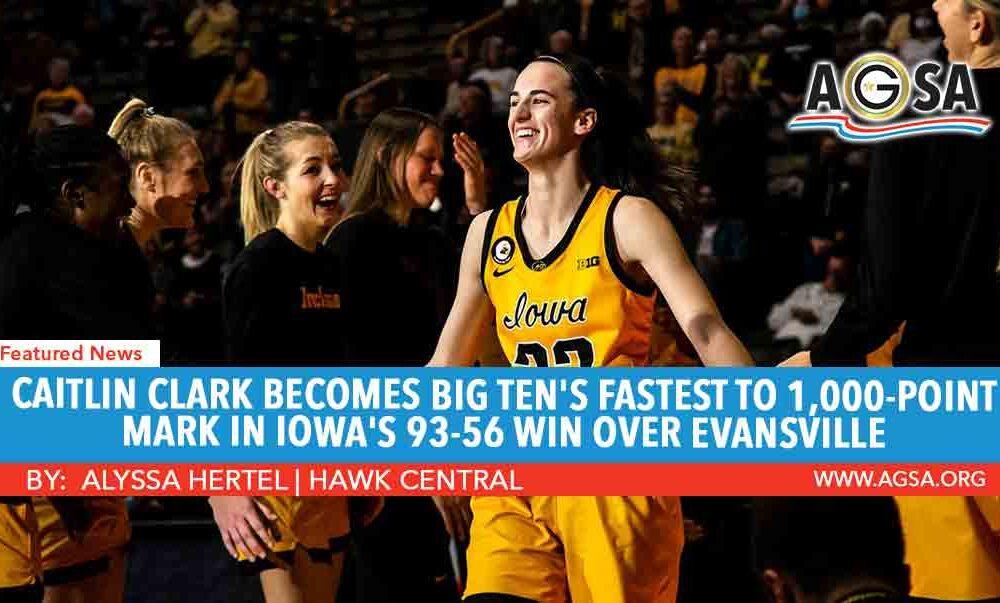 Sophomore guard Caitlin Clark needed just three points to reach 1,000 in her career ahead of Sunday’s home game against Evansville.

Clark has averaged 22 points per game this season, so it wasn’t a question of if she would reach that milestone but when. She gave Iowa its first lead of the game with a jumper in the opening two minutes. With 5:04 on the clock in the first quarter, Clark sunk a deep 3-pointer on a fast break.

She officially broke the 1,000-point mark and, in doing so, became the fastest player in Big Ten history to accomplish this feat. It took Clark just 40 games to score 1,000 points, which beat out previous record holder Kelsey Mitchell, who did it in 41 games for Ohio State.

Clark finished the day against Evansville with a career-high 44 points, a Carver-Hawkeye Arena record, and accounted for nearly half of Iowa’s points in the Hawkeyes’ 93-56 win.

In her historic day, she also recorded eight assists, five rebounds and two steals in 30 minutes of play.

“No matter who’s on the floor, it’s a read and react offense,” Clark said about what about Iowa’s offense makes her so successful. “Nothing’s really set in stone and that’s really when I’m at my best, when I’m just playing, my teammates are flowing, when we pass the ball as well as we do and we just shoot it really well.

Freshman Addison O’Grady stepped up Sunday with the absence of Monika Czinano and McKenna Warnock. She was an essential post player against Evansville, and it showed in her stats.

O’Grady picked up the first double-double of her career, and finished Sunday’s game against Evansville with 14 points and 12 rebounds. She also added two blocks in 24 minutes of play.

Iowa was one of the few teams relatively unaffected by COVID cancellations last season. That has not been the case for the Hawkeyes this year.

Sunday’s game was originally against Illinois, but Iowa was able to schedule Evansville last minute, with the Aces playing Drake in Des Moines on Saturday. It was an important matchup for the Hawkeyes, who hadn’t played since their 74-73 loss to IUPUI on Dec. 21.

But even with a tired opponent in Evansville, Iowa still struggled to find a consistent rhythm. The Hawkeyes climbed to a 26-15 lead in the first quarter and led 41-20 late in the second quarter. Iowa faltered in the final five minutes of the first half, allowing Evansville to go on a 10-0 scoring run.

The Hawkeyes responded with an 11-point streak of their own, making it difficult for Evansville to stage a comeback. But Iowa will need to find its groove earlier in games against tougher opponents.Your stories live here.Fuel your hometown passion and plug into the stories that define it

Prior to Sunday’s game, the Hawkeyes remembered Dr. Christine Grant, former Iowa women’s athletics director and trailblazer for women’s sports at the university, who died Friday at the age of 85.

“I owe Dr. Grant so much,” Bluder said in a release. “She hired me to coach at this university that I love so dearly. More importantly, she gave the opportunity to thousands upon thousands of girls to enjoy and benefit from participating in athletics. Without Dr. Grant’s commitment and efforts to gender equality, girls and women would not be able to experience the benefit of sport the way we know it today.”

Alyssa Hertel is a college sports recruiting reporter for the Des Moines Register. Contact Alyssa at ahertel@dmreg.com or on Twitter @AlyssaHertel.