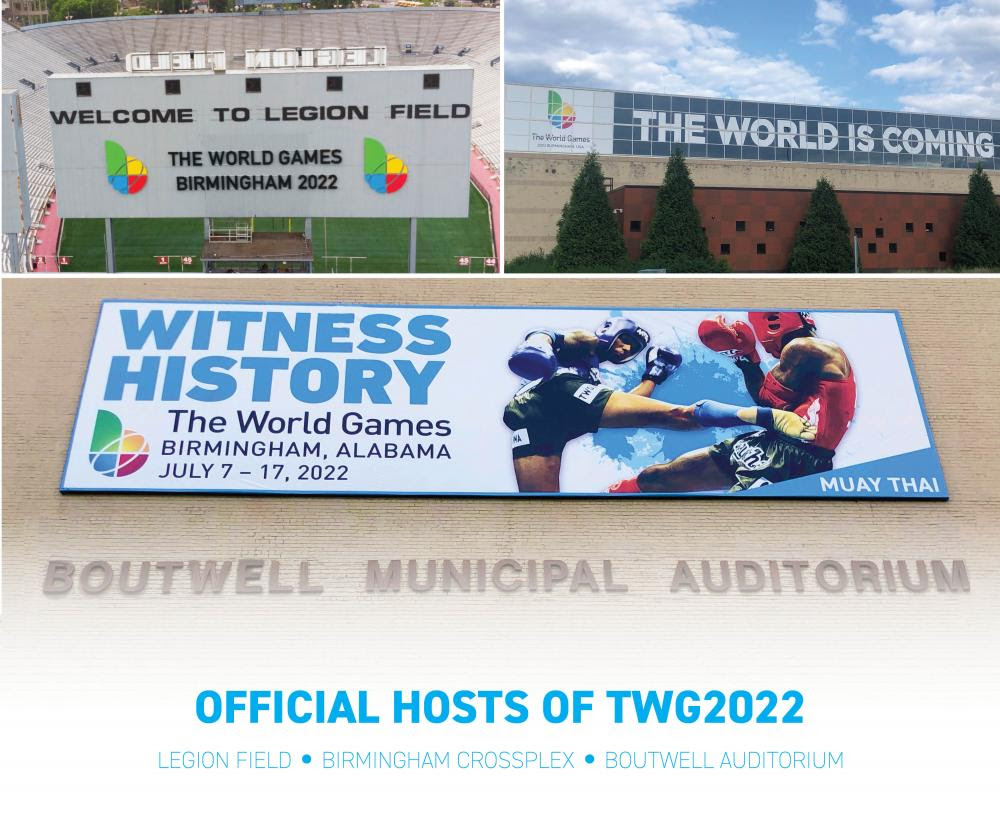 “We’re excited to officially begin announcing our venues,” The World Games 2022 CEO Nick Sellers said. “These are four of the best places to enjoy sports in our community. And by July of 2022, we will finally be able to fill all of the seats in these beautiful venues again as we serve host to the first major international sporting event coming out of this pandemic.  Each of these venues is a prime example of our city’s love of sports.

Historic Legion Field, the current home of University of Alabama at Birmingham Blazers football, opened in 1927 and was named after the American Legion, an organization of American military veterans. Legion Field, seating 71,594, is no stranger to fierce competition, having hosted the Iron Bowl until 2000, the Magic City Classic, and each year of the Birmingham Bowl.

That football tradition will continue with The World Games 2022 when Legion Field plays host to Flag Football @TWG2022 Presented by the NFL, featuring eight men’s teams and eight women’s teams.

Boutwell Auditorium, a 5,000-seat multi-purpose arena, was constructed in 1924 and has hosted a wide-range of events, including concerts, sporting events, banquets, galas, trade shows and more.

Fans who make their way to Boutwell during The Games will see exciting martial arts action, including Sumo, Kickboxing and Muaythai.

Protective Stadium will serve as the host venue for the Opening Ceremony and Closing Ceremony of The World Games 2022.

The new $180 million Protective Stadium, which is scheduled to be completed later this year, will have a seating capacity of 47,100 and will also be the permanent home of the University of Alabama at Birmingham Blazers football team.

“Birmingham’s world-class, multi-sport CrossPlex and the historic Boutwell Auditorium are not only great venues, but key gathering places for our communities. These venues capture the spirit of The World Games 2022, providing opportunities for our international guests and the people of Birmingham to gather as one to celebrate athletic excellence,” Birmingham Mayor Randall L. Woodfin said. “The excitement will only build over the next 18 months as the world prepares to come to Birmingham.”

“Sustainability has always been one of the core values of The World Games, which is why the host cities are not required to build new venues for The Games,” said IWGA CEO Joachim Gassow. “Birmingham has excellent conditions for hosting international sports events, and these three venues, along with the new Protective Stadium and other impressive existing facilities, will be perfect stages for our world-class athletes.”

The World Games 2022 Birmingham will take place July 7-17, 2022 and will generate an estimated $256 million in economic impact for the city.

The World Games 2022 Birmingham will be an extraordinary Olympic-style sports experience where elite athletes from all over the world compete for gold in 34 unique, multi-disciplinary sports. Featuring 3,600 athletes from more than 100 countries, the international event will unite global fans with the Birmingham community in 25+ unique venues around the greater metropolitan area. The World Games 2022 Birmingham, which marks the 40th anniversary of the event, will take place from 7-17 July 2022 and will generate an estimated $256 million in economic impact. The World Games was established by the International World Games Association, an organization recognized by the International Olympic Committee. For more information visit TWG2022.com or find us on Facebook, Instagram or Twitter.